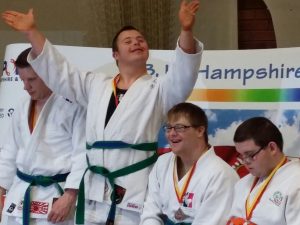 The 1st Hampshire Special Needs Open Championships was held on Sunday 6th July at The Mountbatten Leisure Centre in Portsmouth.  This was a ground breaking event, as it was held at the same time as a Mainstream event with the mats being side by side and used by both competitions and it demonstrated the inclusivity of Judo as a sport.

Let’s look forward to future events, where Mainstream and Special Needs events can successfully co-exist, just like this one. With a large number of contestants from clubs in Hampshire, Hertfordshire, Sussex, Buckinghamshire, Essex, Surrey, Wiltshire, Nottinghamshire, Wales and even Sweden, the event was well supported.

Thanks must go to the players, coaches and carers for all supporting the event and making it a success. The mats at the venue had been arranged so that the Special Needs Players and their supporters were Matside to voice their support and encourage the players, it worked a treat and the support was more vocal than the mainstream event on the neighbouring mats.

Andy and Chris Scott made the long journey up from North Cornwall to run the event on the day and it went very smoothly with the aid of a group of hard working tournament officials, all of whom are richly deserving of praise and thanks. The Referees were Tony White, Dave Dyer and Dave Tooby. The Table Officials were Chris Scott, Malcolm and Dave Tooby and Ruth White. Andy Scott was the Tournament Director. Thanks also go to Lynn Stringer from Hampshire Judo for arranging all of the medals. Paul Hamilton, Chair of Hampshire Judo and Tina Penfold, Secretary of Southern Area Judo and IJF Kata judge presented the medals to the competitors.

The Competitors had a wide range of conditions including Visually Impaired, Cerebral Palsy, Downs Syndrome, Autism, ASD, ADHD, Asperger’s and Learning Difficulties this coupled with differences in gender, size and ability made it challenging to safely match pools of players together, but it was achieved with some very hard and it worked well with all the competitors having to go through several fights to win their medals.

I’ve seen many competitions over the years in many different Martial Arts and the way that Andy and Chris ran this one, coupled with the refereeing could be a Gold standard for others to follow. Interestingly for many ‘mainstream’ players and their families this was the first time that they had seen Special Needs Judo. Yet their compliments were forthcoming and well received about the quality on the Mats and the sense of fun and enjoyment from players and officials alike. Surely this is something that we should be striving for in all events.

Some of the comments that we received included the following:-

Suki Barton Coach at Dartford Judo Club said ” From a coaches perspective it was a beautifully run competition. I would like to myself and on behalf of Dartford Judo Club and Liam’s parents say a big thanks to everyone involved for making it great. Hope to bring more players next time.”

Tony Boby the parent of a young competitor said ” Just like to say well done for oganising such a good comp on Sunday. I thought it was really well presented and the Special Needs element really added to the atmosphere and colour of the event.”

What was nice about the event was the friendliness of the competitors to one another and seeing coaches helping the ‘opposition’ isn’t something you’ll see too often elsewhere.  We saw some fantastic matches, Liam Gabb and Christian Elford were a great example and they traded hold down for hold down, never quite managing to take it to the full time required, but they smiled, listened to the encouragement of their coaches and the supportive referees and finally Christian managed to win with a great Kesa Gatame. Looking at Sarah Gratton’s throw for Wazari and hold down for Ippon against Roxanne Simmons, the excitement on her face was clear to all having won. Skye Westwood is also worthy of a mention, with no suitable entries in the Special Needs categories to compete against, with the approval of her coaches and parents, she entered the Mainstream competition and promptly won the Gold Medal in the Girls <40k category. 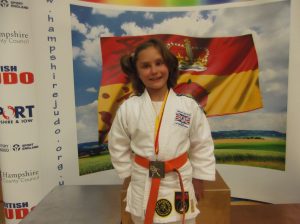 This is how Judo should be played. Fun for all, enjoyment, pleasure, supportive and encouraging officials and parents/carers/players who have exemplary etiquette.

Watch out for the event next year, we’ve got some got some good ideas and plans for our next Hampshire Special Needs Championship.